A Nod To Nautical at Harbor Court Hotel 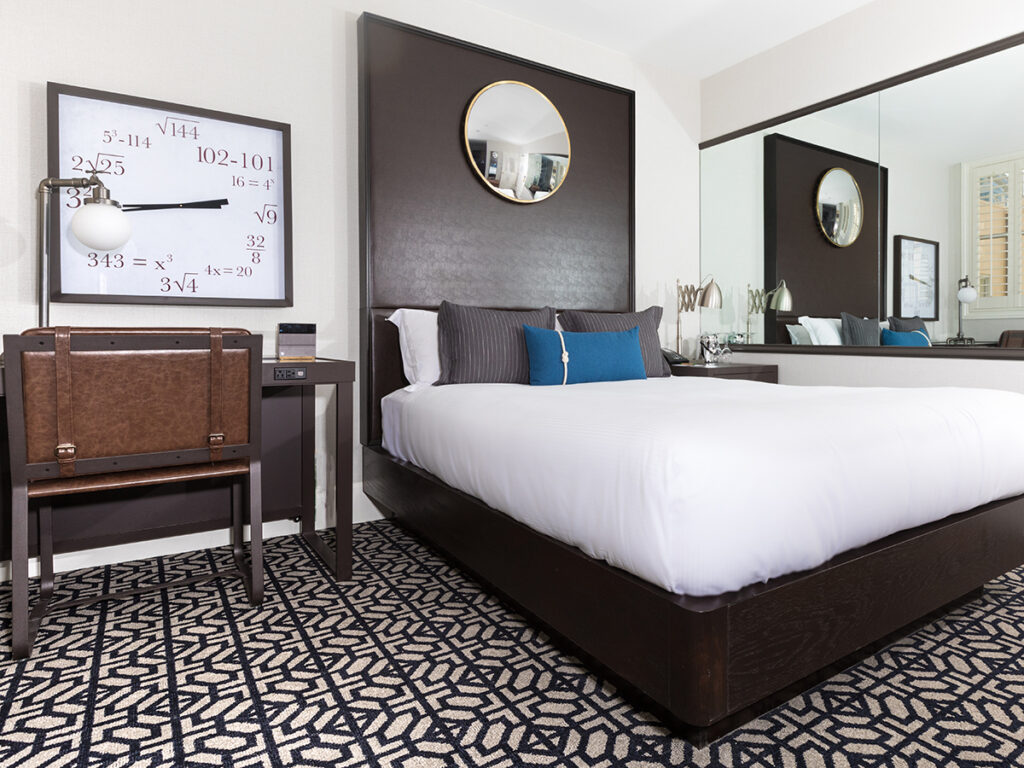 Harbor Court Hotel in San Francisco has officially reopened with an entirely new look. The hotel is one of several projects Bray Whaler has handled with the talented design team of EDG Interior Architecture + Design, and was featured in the May 20, 2021 issue of INSPIREDESIGN. Set in the Financial District just steps from the Embarcadero Waterfront, the Harbor Court Hotel exudes San Francisco’s trademark urban style and sophistication. On April 1, the hotel unveiled an all-new lobby experience that joins reimagined guestrooms that were completed in 2020.

“The new lobby design [completed in 2020] pays homage to the original building’s historic roots and the palette features a nautical touch to compliment the stunning views of San Francisco Bay with its pedestrian promenade and active boating and shipping waterfront,” said Jennifer Johanson, IIDA, president/CEO, EDG Interior Architecture + Design, who lead the Harbor Court Hotel project. “The Beaux-Arts building was completed in 1926 as the YMCA building, and the then state-of-the-art hotel served as a retreat for military service members and later for the local community as a gathering and meeting place. For nearly 100 years, the YMCA building has served San Francisco and features a multi-level facility with sports courts, a pool and fitness spaces. The unbeatable location is convenient to leisure and business activities alike, and sits across the Embarcadero from the San Francisco Ferry Building, with convenient access to ferries and trams offering transport to the City’s hottest attractions.”

Guests will now be able to experience an elegant yet youthfully edgy vibe at this boutique gem which boasts postcard-perfect views of San Francisco Bay. The most popular new room is the Skyline Penthouse Suite, which has incredible views from floor-to-ceiling windows that appear to float over the Embarcadero.

“The reimagined lobby sets the tone with a timeless sensibility—it’s as if you’ve stepped into the original 1920s social club when San Francisco was a bit more exotic and European… Enjoy the relaxing fireplace and classic ambiance over a cocktail or coffee, surrounded by books and artifacts which are steeped in history,” Johanson said. “At the same time, a bit of exploration yields a more contemporary take on art and style. A Tiffany turquoise-blue desk welcomes guests with a pop of color, a well-placed bar cart reminds us that five o’clock is on its way [perhaps after our Pilates class] and the new lobby puts you in touch with one of San Francisco’s most affluent up and coming neighborhoods, the East Cut.”

The reopening of Harbor Court brings the return of the popular Ozumo, an upscale Japanese restaurant boasting one of North America’s largest saké menus. The hotel is also adjacent to the historic Embarcadero YMCA building, where guests may use these exceptional facilities, including state-of-the-art equipment, more than 90 classes per week, a basketball court and Olympic-sized pool.

“As part of this project, the historic features of the lobby level were highlighted and celebrated, including terracotta arches at the curved plaster ceiling and a historic fireplace,” Johanson said. “Warm oak paneling, wood floors and exotic rugs set the stage for a return to 1920s simple elegance. Artwork throughout the main lobby is a tribute to the building’s evolution and contributions to the San Francisco community over time. Displays of key athletic achievements include Willy Mays’ ticker-tape parade after a World Series victory and old-school boxing gloves, artwork featuring Village People’s iconic song is a playful nod to the YMCA in culture and historical paintings touch on San Francisco’s key contributions to the LBGT movement—The YMCA and its countless contributions to the community are presented throughout.”